Many years ago, on a Sallah Day, in Dubai, a very Rich Man who had no wife, no children, no other family members, decided to invite all the employees of his Mansion to dinner.

He called the staff and asked them to sit at the table.
In front of everyone there was a QUR’AN and a small sum of MONEY. 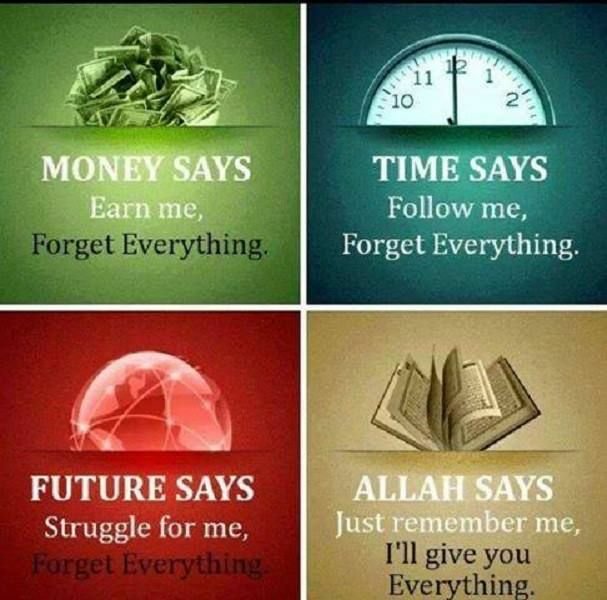 After everyone had their dinner, the Rich Man asked:

“What would you prefer to receive as a gift: this QUR’AN or this MONEY?

Do not be shy, you can choose what you want. ”

THE SECURITY GUARD WAS THE FIRST TO REACT:

“Sir, I would love to receive The Qur’an, but since I have not learned to read, the money will be more useful to me.”

THE GARDENER WAS THE SECOND TO SPEAK:

“Sir, my wife is very sick and that’s why I need more money, otherwise I would choose The Qur’an for sure!”

THE THIRD WAS THE COOK:

“Sir, I like reading to tell the truth, it’s one of the things I like to do, but I work so hard that I never find time to flip through a magazine, let alone The Qur’an. I will take the money. “

IN THE END, IT WAS THE turn OF THE BOY WHO TAKES CARE OF THE ANIMALS OF THE MANSION.

And as the Rich Gentleman of the villa knew that the boy’s family was very poor, he stepped forward and said:

“Surely you too want the money, do you not? So that you can buy food to have a good dinner at home and buy new shoes? “

BUT THE BOY,
as for him, surprised everybody with his answer:

“It would not hurt to buy a turkey and other tasty food to share with my parents and siblings. I also need a pair of new shoes because mine are very old. Even so, I will choose The Qur’an, because I have always wanted one. My mother taught me that the Word of Allah (SWT) is worth more than gold and that it is more tasty than a honeycomb.”

After receiving The Qur’an, the boy immediately opened it. He found TWO ENVELOPES inside.

In the first, there was a CHEQUE that was 10 TIMES higher than the money on the table.
In the second, there was a DOCUMENT (Will) that made him (whoever would choose The Qur’an), the HEIR to all the wealth of the Rich Man!

Faced with the Boy’s emotion and the astonishment of the other servants, the Rich Gentleman opened The Qur’an 5:23 and read aloud so that everyone could hear:

“…And put your trust in Allah if you are believers indeed.”

The fear of God Almighty is pure, it subsists forever;

The judgments of Allah (SWT) are true, they are all just.

They are more precious than gold, than a lot of fine gold; They are sweeter than honey, than the one that pours rays.

May Allah (SWT) give us Wisdom and help us always make the Right Choice.

So what do you Choose?

This site uses Akismet to reduce spam. Learn how your comment data is processed.